OnePlus’ latest flagship smartphone has been leak on retailer’s website, Giztop. This time, the leak reveals its full major specifications.

While we are still a months away from the official launch, we have been hearing leaks of the device for quite some time now. Earlier this month, a 360-degree render of the handset has been leaked by OnLeaks. Video of that is embedded below.

Now to sum things up, Giztop also listed the handset on their page with its full specifications. This time though, the only image we see is that of the front of the device. Like the previous leak, the OnePlus 7 doesn’t have a notch cut out. The display is a full-screen display, hinting a pop-up selfie camera. We couldn’t be more right. 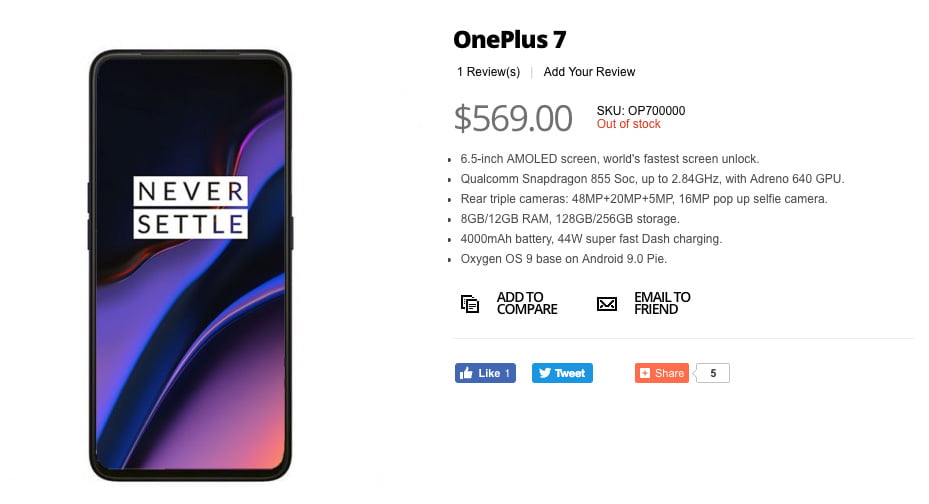 As per Giztop, the display will be a 6.5-inch AMOLED display. The display resolution is not listed though. The page also mentioned “the world’s fastest screen unlock.” And watching all the renders, it looks like OnePlus is baking the fingerprint sensor under the display.

Like any 2019 flagship smartphones (except the Nokia 9 PureView, of course), the OnePlus 7 will use the latest Qualcomm Snapdragon 855 SoC, clocked at 2.84GHz and Adreno 640 GPU. The base model of the handset will have 8GB of RAM, while the higher-end will include a 12GB of RAM. Ridiculous is how we describe this, but more is better for most users. And this will make it more future proof device, I would say. The internal storage is up to 256GB, which we really hope is expandable.

Now for the camera. The OnePlus 7 is the first smartphone from the company with pop-up selfie camera. Hidden on this tray is a 16-megapixel camera which to our guesses will use an f/2.0 lens. At the back, there will be a triple-camera setup. The primary camera will be a 48MP, while the other two will be a 20MP and 5MP sensor. Unfortunately, there’s no mention how this camera will work. Well, obviously, the 5MP sensor is for depth sensing. But the other two are still a mystery.

Keeping the lights on is a 4000mAh battery with support for 44W fast Dash charging. The OnePlus 7 will ship with OxygenOS 9 based on Android 9 Pie. As for the launch date, expect it to be on the first week of May. We’ll keep you posted though.

Realme 2 Pro to get Nightscape Mode alongside ColorOS 6!