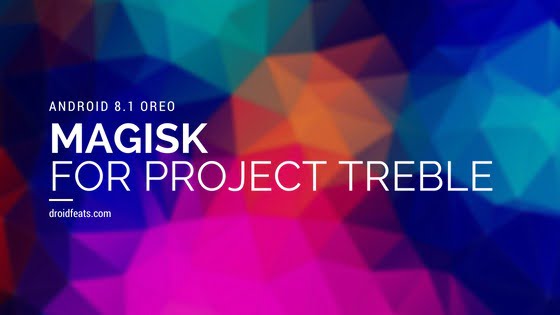 Project Treble is a major re-architecture work in Android. It separates the Android OS (Firmware) from the vendor Hardware Abstraction Layers (HALs). This allows the Firmware to work with the device’s hardware. The benefit of having Project Treble is that it will enable OEMs like HTC, LG, Samsung, and others to work on modifying Stock Android Firmware while they wait for the manufacturers like Qualcomm or MediaTek to release updated HALs. This results a faster update for all the devices that support Project Treble. We already published a content about Project Treble supported device list with download links and how to install Android 8.1 Oreo-based Project Treble ROM. Check it out here:

If you have already installed Project Treble, this guide will help you to root your device using Magisk Root Utility. Thanks to its systemless root approach which let you gain root access on your device without breaking OTA support of the OS.

Magisk is the most popular root tool in the Android Community, and the developers behind it are continuously providing updates with new patches. Previously, we used SuperSU to root our devices which not only void the warranty of a device but also breaks OTA supports. However, the systemless root approach changes all of these.

By flashing the ZIP files given down below, you can easily setup and use Magisk with Magisk Manager having a lot of Modules on your device running Project Treble Oreo-based ROM. We will be using TWRP Custom Recovery to flash Magisk. Therefore, you must have TWRP on your device. If not, please follow this TWRP guide to install it quickly.

There are tons of feature in Magisk Utility, but we are listing some of the key features of this tool which makes Magisk the most loved root solution of Android devices.

The tool is fully open source. That means any developer can start working on it as it is very easy to build.

It allows to modify your system (vendor) without tempering the partitions. You can load anything in Magisk systemless-ly. Also, you can easily mount partitions without any risk of getting damaged.

You can use MagiskSU feature to get root access which is based on phh’s Superuser. Also, it is based on CM Superuser code. Superuser is a think of past which was used on the day of Jelly Bean and Ice Cream Sandwich.

Magisk Manager is an Android App that gives you to control Magisk Root, upgrade Magisk and operate MagiskHide lists. Also, with this Manager, you will get access to the official Magisk repository to use their homemade modules. Modules are particular for Magisk users only.

Resetprop gives you access to modify Android system properties, including read-only props. This works along with MagiskHide to trick device status that sent from the bootloader.

DM-Verity, Forceencrypt, Remove AVB 2.0, and many more. You can also unlock partition blocks to support remount to rw.

You can download the latest Magisk 16.4 for your Project Treble ROM from the given links below. Root packages are available in the flashable ZIP format. You can download and install it using our tutorial below.

How to: Install Magisk on Project Treble ROM

For those who have already installed Magisk, follow these steps to update it:

After the reboot, the Magisk Manager 5.7.0 will be automatically installed, and you can proceed to browse through the official repository and download required modules to add extra features on your Android Device.

So you are done with this tutorial! You had successfully rooted your Project Treble ROM using our guide. If you faced any problem with performing this tutorial, please let us know by dropping a comment below. Our team will reply you back as soon as possible.