The Recognized XDA Developer topjohnw has recently updated Magisk to the latest version. You can now download the latest Magisk 16.4 beta and Magisk Manager 5.7.0 for your Android device.

When it comes to rooting an Android device, Magisk is always at the top. No doubt SuperSU ruled the Android community on root solution for several years. But then it was back in 2016 when Magisk launched, it offers to modify the Android devices systemless-ly. 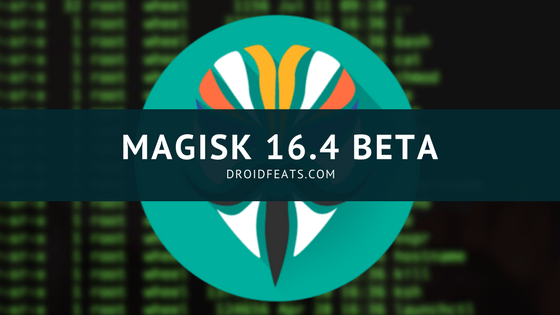 Today Magisk is well established and the most popular rooting solution that works on all the Android devices. The developer has announced the newer version, so you can download Magisk 16.4 Beta and Magisk Manager 5.7.0 from this post.

Magisk 16.4 beta version has some new features and addon. Check out the changelog below, as mentioned by topjohnwu to know more:

Functions like the MagiskHide which is an inbuilt utility which completely hides your root from apps which need not access root.

We appreciate the work of developer on this unique Universal Systemless Interface. The Magisk 16.4 Beta update brings some major rework to the daemon and how Magisk is initialized during and after the boot. Meanwhile, the latest Magisk Manager 5.7.0 comes with few changes and bug fixes.

Like any other versions of the previous release, Magisk 16.4 Beta is available as a ZIP and you can flash it using TWRP custom recovery.

How to install Magisk 16.4 beta

For those who have already installed Magisk, follow these steps to update it:

How to update Magisk 16.4 Beta

After the reboot, the Magisk Manager 5.7.0 will be automatically installed, and you can proceed to browse through the official repository and download required modules to add extra features on your Android Device.

Magisk doesn’t belong to that category since the latest beta version explains a lot about its stability and the increase in users proves its popularity among Android community.