Android enthusiasts can now download Magisk 18.0 stable systemless root utility to root their device using this guide. This version brings improvements to Magisk Hide, for which, instead of the process name, the process monitor now matches component names. This in-return supports Magisk Hide to target all processes generated from the applications on the hide list. So, with the updated Magisk 18.0 stable build, you can enjoy better functionality with Magisk Hide, which will let you bypass root checks to those apps that rely on SafetyNet to detect root access and system modifications. 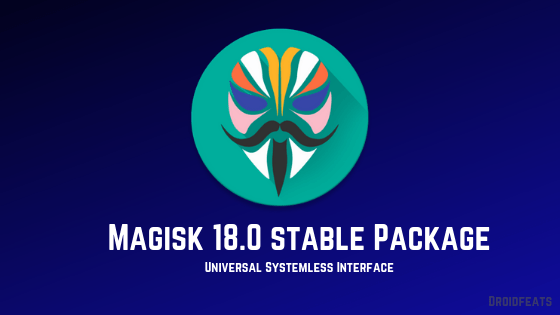 Magisk 18.0 is a significant upgrade from 17.x versions to make /system modifications. Furthermore, the developer (topjohnwu) declared that the stable release adds to a significant number of place, rather than incrementing the decimal. Since there are a lot of new smartphones released in the market with the latest software, this build extends its support to a vast number of devices running Android 9.0 Pie and new UIs.

Additionally, Magisk 18.0 is now patching the procfs security vulnerability on all Android 7.x Nougat devices. It has also shifted to a new codebase based on C++ upgrading from the older C-based codebase. Talking about the Magisk Manager, it also got updated to version 6.1.0 to assist the new Magisk build entirely.

This build mainly focused on better anti-root detection and built-in systemless hosts module. Moreover, the support extent and compatibility is now for a vast number of devices available in the market with new Pie-based software. A new downloading method is integrated into the Magisk Manager 6.1.0; you are no longer to use the buggy system download manager. Thanks to the developer for continuously updating Magisk with new features and several bug fixes. Check out the full change-log below:

Following are the changelog of Magisk 18.0 as per the original XDA developer thread:

Following are the changelog of Magisk Manager v6.1.0 as per the original XDA developer thread:

The developer has done an impressive job on updating Magisk to version 18.0 with a lot of useful features. We appreciate his hard work toward the community. You can now download Magisk 18.0 ZIP and Magisk Manager 6.1.0 APK from the link below!

The new Magisk 18.0 version can be flashed via TWRP Custom Recovery. If you are already in the previous version of Magisk, you don’t need to install it using recovery. You can directly update it using the stable channel. Check out how to update Magisk in the tutorial ahead.

How to update Magisk root to Magisk 18.0 stable

Tap on ‘Install’ or in some devices ‘Direct Install.’ The latest Magisk 18.0 installer will do the work automatically. Reboot the device by tapping the ‘Reboot’ button.

[NOTE: The screenshot given above is taken from an older version of Magisk. But the process will be the same for version 18.0.]

After the reboot, the Magisk Manager 6.1.0 will be automatically installed, and you can proceed to browse through the official repository and download required modules to add extra features on your Android Device.

So you are done with this tutorial! You had successfully installed the latest Magisk 18.0 stable using our guide. If you faced any problem with performing this tutorial, please let us know by dropping a comment below. Our team will reply you back as soon as possible.